YOU ARE HERE:Home » How To Watch Polo

How To Watch Polo

Polo can daunting to watch if you don’t know the basics.

In an outdoor game, the setting is so beautiful, the horses so majestic, the players so festive in their full polo regalia that you can watch — mesmerized for who knows how long — then suddenly discover you have no clue what’s happening on the field.

You do realize, however, that there are two teams, and that both teams are trying to score goals by getting the ball through the red goals at either end of the field. Beyond that, you just don’t get what all of the mad scrambling is about.

While you are in your lane, or on “the line of the ball,” your correct shot (the one that won’t cause a whistle or penalty to be blown) depends on you keeping your horse straight, and varying which side of the horse you will make your shot from. The right side of the horse is called the offside. The left side is called the nearside.
The player with the offside shot always has the right of way.

That’s because a freeway has two directions. And, sometimes, two players, each traveling in different directions, but both on the line of the ball, reach the ball at the same time. To avoid a collision, both players are allowed only an offside shot. This is why some players, who look like they have a great shot, sometimes defer to another player. Every time the ball is hit, the line of the ball changes, so you have to pay attention to know who has fouled whom.

Umpires, the two mounted players in black- and white-striped jerseys, watch intently, blow their whistles when they see an infraction, and penalize accordingly. If the umpires disagree, they can go to the referee, who is midfield in the stands, for a tie- breaking opinion.

Outdoor polo is played on a field that is 300 yards long and 160 yards wide. There are 6 chukkers, or periods of play, each 7 minutes long, with time out for fouls. Four players are on a side, and each has a number on his or her jersey. (Jersey numbers are not the same ratings). Jersey numbers reflect the area on the field for which the player is generally responsible that the player is generally responsible.

The important thing to know is that players often change positions during the game to cover for a teammate who is temporarily out of position. Ideally, the No. 1, or forward, is out front, ready to take a pass from a teammate, and, hopefully, take the ball to goal. Numbers 2 and 3 are middle-range players, who are ready to scramble, pivot and attempt to send the ball to No. 1, while keeping the other team from taking the ball. The No. 4 player — know as the back — is a defensive player. He waits in the rear, trying to stop the opposite team from going to goal, or turning the play and driving the ball forward to his team.

When the opposition gets the ball and is going toward goal, the dynamics change, and all members of the opposing team play defensively until they control the ball. Once a goal is made, signified by a red flag waived at the goal, the players line up at midfield. After each goal, the teams change direction and go to the opposite goal.

Now, let’s learn about ratings. Every player is rated by a committee at his home club. These ratings reflect a player’s expertise at the game and range from a – 2 for a beginner to a 10 for the best player. This number has nothing to do with how many goals a player makes during a game. That’s because a good defensive player may not put balls through the goal during a game. Ideally, he should be defending the opposition’s goal, stealing the ball, driving it to his team, and allowing his team to score.

During a game, players are allowed to “hook” and “ride off” other players. The “hook” is used to block a player’s mallet when he swings. A “ride off” involves safely pushing your horse into the side of the opponent’s to take him off the line.

The clock is stopped for fouls. Usually, the fouled team has a free hit to a defended or undefended goal, depending upon the severity of the foul. If the ball does not go through the goal but goes over the back line, the defending team knocks it back in without stopping the game. But if the ball is hit over the back line by the defending team, the team trying to make the goal gets a “safety,” or a free hit 60 yards from the goal.

Watching indoors, you can see right away that there are some visible differences to what has been described. The action is much closer; the arena is only 150 feet by 300 feet. Because there is much less area to cover, each side has only three players. The rules of the game generally are the same, however.

Lastly, the horses, or “ponies,” which are said to be 70 percent of a player’s game, are a huge part of why people like to watch and play polo. Most outdoor polo ponies are thoroughbreds, and a player cherishes a good pony because without a handy horse he won’t make many plays. If a player can get to a ball, he obviously can’t hit it.

Conceivably, a pony can play two chukkers in a game, never consecutively. Most serious outdoor players bring six or more horses to the field for a six-chukker game. The horse’s welfare is paramount. It takes a lot of time, conditioning and training to make a good polo horse.

Arena polo ponies, while trained and conditioned as intensely as outdoor ponies, are generally smaller and quicker. They are not necessarily thoroughbreds because they don’t need to cover the distances that are demanded outdoors.

Hopefully, with all of this new information, you will be more comfortable watching, enjoying, arguing with the umpires at your next polo game. Pick a favorite team and encourage them. It’s a wonderful way to spend an afternoon. If you’re feeling adventurous, look into the lesson program at your nearest club; it’s a great place to start. I guarantee once you try it, you’ll be hooked.

Chukker: A chukker is a period of play.  Each chukker is 7 minutes. There are 6 chukkers in an outdoor game and 4 indoors. 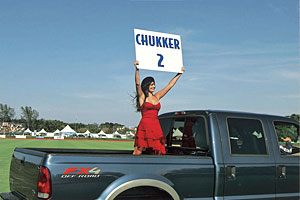 Foul: Any infraction of the U.S. Polo Association rules. Fouls can range from dangerous riding to the line of the ball. 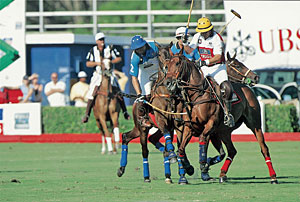 Handicap: Polo players are rated from -2 to 10 goals. A -2 is a beginner, with 10 goals defining a player who has reached the pinnacle of the sport. The U.S. Polo Association’s ratings committee issues rankings annually. A player’s handicap is based on playing ability, horsemanship, team play, horses and knowledge of the game. Players’ handicaps are added together to form a team that is equal to its competition. The difference in goals between two teams is awarded to the lower rated team before play begins.

Line of the ball: The imaginary line that the ball creates each time it is hit.  Players may not cross the line of the ball except in special instances. 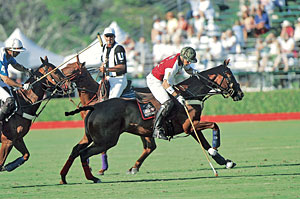 Goal: Each time a ball goes through the two goal posts. An offensive or defensive player and his horse can score a goal. 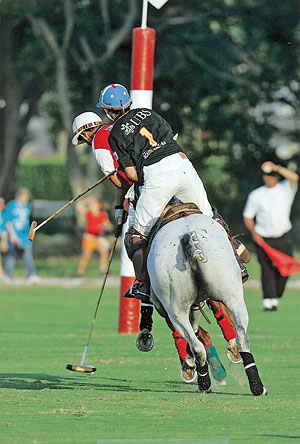 Hook: A player may block another player’s shot by hooking his mallet. 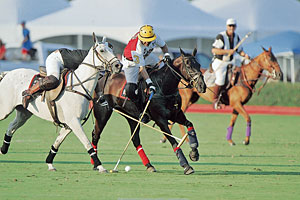 Throw In: Umpires start the game by throwing the ball between the two teams that lined up on different sides. 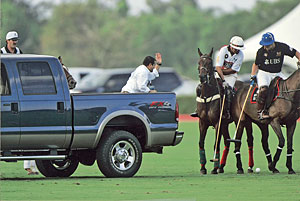 Ride Off:  An opposing player may ride his horse into the other player’s horse.  This maneuver is used to take another player off the line or interfere to with his shot. Ride off’s must be made at a similar speed to the other horse and at a proper angle.

Referee: Acts as the final word when the umpires disagree. The referee is positioned off the field.

Off-Side: The right side of the horse. 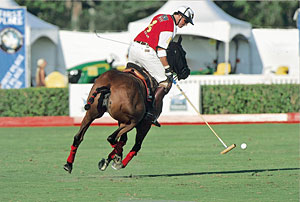 Near-Side: The left side of the horse. 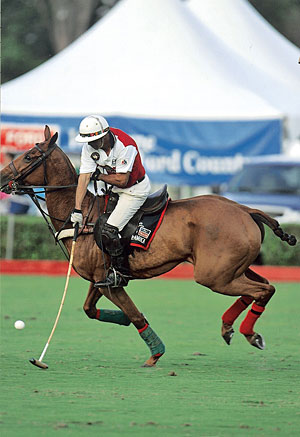 Out of bounds: Any time a ball is hit out of the polo field’s perimeter, the play continues and the umpire throws in the ball from that spot.

Penalties: Any infraction of the rules results in a penalty. The umpires determine the severity of the foul and awards a penalty from 1 through 8.

Umpires: Mounted officials on the field who  are responsible for enforcing the rules. 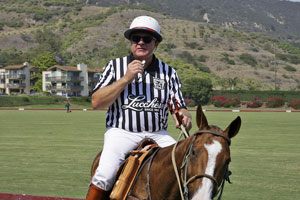